Liptalk 2: Personal Reflections of A Tragedy

On Oct. 27, like most Saturday mornings, I ate my breakfast and sat down to watch “CBS This Morning.” At 10:41 a.m., Rob Elston, federation security coordinator, texted me the following message:

Good morning Andy, I don’t know if you have heard the news that there has been a shooting at a synagogue in Squirrel Hill during a prayer service. Let me know if you hear any other information?

That began two days of emails, texts, and phone calls to our Federation senior staff most notably, Bonnie Burdman, JCRC director, and Mike Rawl, JCC director, as well as Rick Marlin, Federation president, and Suzyn Schwebel-Epstein, JCRC president. I also received messages from community members, friends and family from throughout the U.S. and Canada, as well as a cousin in the Netherlands, asking how my daughter Rachel was doing. For those who don’t know, Rachel lives with her fiancé Scott in Pittsburgh, and she works for the Jewish Federation of Greater Pittsburgh, as the director of women’s philanthropy.

Coincidentally, my wife Hilari and I were planning to visit Rachel and Scott this weekend, and we took off in the early afternoon. Hilari and Rachel were planning to attend a wedding fair on Sunday while the men watched football. Obviously, these plans changed. On our way to Pittsburgh, Hilari read my texts and typed back my responses. At the same time, Bonnie (who was out of town for a family wedding) worked on drafting a statement to the media as well as the Jewish and general community. Mike was interviewed by channel 27 on Saturday. He discussed the numerous security measures that Federation has implemented over the past several years, totaling roughly $350,000. Similarly, I was interviewed in Pittsburgh by channel 27 and further emphasized that Rob Elston also consults with the temples on a regular basis, conducting security training.

While in Pittsburgh, I spoke with Tirtza Kohan, who heads MSJS, to discuss communicating with family members regarding additional security measures for Sunday School. Tirtza sent out an email to families that hopefully relieved any anxiety. She told the families a security guard would be located at the entrance of Akiva (where Sunday School is housed) at drop off and pick up, as well as reminding them that ALL doors leading to the school are locked and equipped with a buzzer and a camera.

This visit in Pittsburgh was like no other! I learned quickly that Rachel was busy herself with canceling planned events for the next few days, and involved in planning for a late afternoon interfaith event on Sunday. After dinner Saturday night, and watching the news for further details of the shooting, we went to sleep and woke up early Sunday to drive back to Youngstown. On the way home, I heard from Linda Kessler, a JFS counselor, who inquired about reaching out to JFS in Pittsburgh to assist in counseling for those affected by the shooting. Linda also wanted to know if there would be a need for counseling at Akiva on Monday. Both Linda and I reached out to Ken Bielecki, JFS director, who agreed to contact JFS in Pittsburgh and Kathy Mioni, principal of Akiva. Also, on our trip home, Bonnie and I discussed holding an interfaith prayer service on Thursday, Nov. 1, in the evening at Temple El Emeth, to include a daily minyan service. The date was shared with Rick Marlin and Suzyn Schwebel-Epstein who both readily concurred. We’re now planning and publicizing the Thursday night event with Bonnie doing much of the work contacting our friends in the interfaith community. 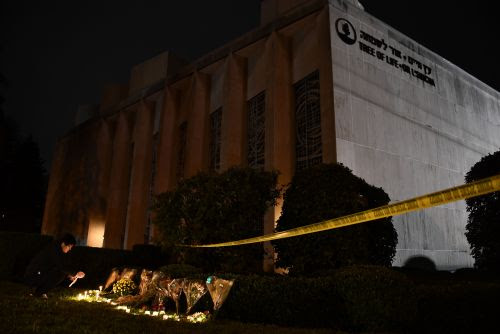 A man kneels to light a candle beneath a police cordon outside the Tree of Life Synagogue in Pittsburgh, Oct. 27. (Brendan Smialowski/AFP/Getty Images)

On Sunday evening, around 7:30 p.m., Rachel called on her way home from the Pittsburgh event, which drew over 3,500 people from every faith community. Of all the speeches Rachel recalled, she was most moved by the representative from the Muslim community. The Muslim community presented a check for $75,000, and offered to give more if needed, and pledged to help guard outside area synagogues if requested, to allow members of the Jewish community to pray without fear.

I am sure we all will never forget where we were on Saturday, when the shooting occurred, similar to recalling where we were on Sept. 11. I hope that I am wrong, but I fear that one day something like this could happen in the Mahoning and Shenago valleys. It is not a question of “if” but “when.” Let us all pray that this never happens again! Thank you to everyone who has reached out to me personally to check up on Rachel in Pittsburgh. I can’t express how much this support meant to my family.

May the memory of the 11 people who lost their lives be for a blessing. Thank you to the police and first responders for putting their lives on the line to apprehend the shooter.