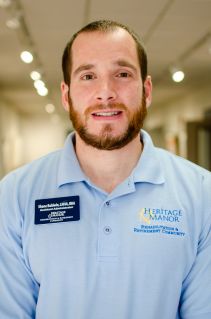 Shane Baldwin was recently promoted to director of operations for Heritage Manor Rehabilitation & Retirement Community. Formerly assistant administrator, Baldwin has been with Heritage Manor since July 2017.

In his new role, he is responsible for overseeing all day-to-day operations of Heritage Manor.

Baldwin, who is from Champion, Ohio, graduated from the University of Akron with a bachelor's degree in business administration and a minor  in entrepreneurship in 2014. Following graduation, he ran a home inspection/ HVAC business in South Carolina with his father. “After doing that line of work for a few years, I found this wasn't my true calling,” he said. “I then decided to move back to Ohio to pursue my nursing home administrator license.” His family played a pivotal role in helping him get where he is today, he said. “I have a large and very supportive family,” he added. “A large portion of my family has been involved in long-term care. My grandmother was a director of nursing for over 30 years, my mom as well as one of my aunts are registered nurses, and I have two aunts who are nursing home administrators. I believe this is one of the main reasons I decided to get into long-term care.” After completing a nine-month internship with Community Skilled Health Care Centre of Warren, he passed state and federal tests to obtain his license and began working at Heritage Manor shortly after. “My favorite part of working at Heritage Manor is being able to make a positive difference in our residents’ lives as well as their family members’,” he said. “There is no better feeling than hearing from a resident that being at Heritage Manor is like being at home or a resident's family member telling you they know they made the right decision to bring their loved one here. Heritage Manor has the reputation as being one of the best nursing homes in the Mahoning Valley, and I plan to add to this legacy during my time here.” Eric Murray, executive director of senior care and services, said, “Shane has been instrumental in ensuring a smooth transition with my onboarding (from Cristal Vincent) as well as implementing the necessary operational .responses to combat COVID. His knowledge of the building and its day-to-day functions have been incredibly important and appreciated during these challenging times." Outside of work, Baldwin enjoys just about any outdoor activity. Working out is one of his biggest hobbies. He’s an Ohio State and Cleveland sports fan. Prior to the pandemic, he enjoyed attending live sporting events and country concerts. Most of his family lives locally, so he spends time with them on a regular basis.